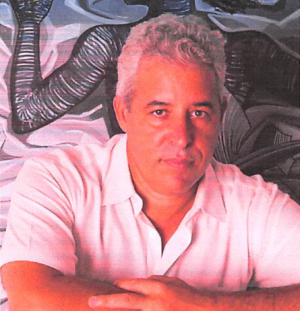 Alejandro Carreño was born in 1962 in Havana.  At the age of 16, he won first prize in the Annual Art Contest of the Federacion Estudiantil de Ensenaza Media (FEEM) in Cuba. He studied Graphic Design at the Escuela de Diseho Grafico e Industrial in Havana and received a scholarship to study Product Design In Germany at the Kunsthochschule Burg Giebichenstein from where he graduated as Diplomdesigner. After the fall of the wall, he moved to Berlin where he started working as a Graphic Designer and also began to work on his first exhibit.

In June of 1994 Alejandro’s exhibit, “Raices,” a theme based on the Afro-Cuban culture, inspired the deceased Cuban writer, Jesus Diaz, who also lived in Berlin at the time, to write of Alejandro’s work: “And just towards the obviously Cuban, Carreno turns his eye from his nostalgically distant Berlin viewpoint. He draws in black and white, the first and major external difference of the inhabitants of the island, and delivers us above all images of black Cubans, a skin-color less common in Berlin. His Cubans are, above all, musicians, representatives of the biggest and deepest cultural Cuban dimension, wisely re-created by the hand of Carreno in all its lightness, that national dimension that Cintio Vitier described as a constant in our poetry.”

In 1995 Alejandro moved to the Dominican Republic where he records his impressions of Caribbean life in bright acrylic colors. His exhibit “The Flight of the Dreamfish” in June of 2001 in Santo Domingo, employed a new painting technique using the palette knife as a painting tool. Alejandro’s subjects surround us with beautiful metaphors in which the most imperative desires of the human being united. The life around him makes his brushes and palette knives move. His paintings deliver impressions of the people, the ocean, and the life under water with refined lines and strong contrasts that create the mystique of Carreño’s art. Since 2009 Alejandro lives and works in Martha’ Vineyard, USA.  His art is in many private collections and has been shown in many one-person and group exhibitions in Europe, the Dominican Republic, and the USA.