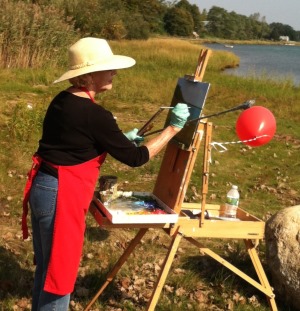 When she lived in England, Susan O’Brien McLean painted cricket matches, English country gardens, and picnics by quiet streams. Since living in Osterville, her subjects are children playing by the sea and landscapes depicting the beauty of Cape Cod. She also likes to paint still lifes and portraits. But no matter which side of the Atlantic she’s worked on, her vision is touched by nostalgia for a gracious lifestyle.

During her time in England, Susie exhibited regularly at the Royal Institute of Painters in Watercolours, the Pastel Society, the Royal Portrait Society and several galleries in the London area. Since moving stateside, she’s been elected as a Copley Artist by the Copley Society in Boston. Her work has been included in exhibitions at the Cahoon Museum of American Art, Cape Cod Museum of Art, Cape Cod Art Association andDuxbury Art Association. Over the years, she’s received many awards, including the Grumbacher Gold Medal for excellence in painting.
For the past 25 years, Susie has participated annually in the Cahoon Museum’s Great Brush Off, the Copley Society’s “Fresh Paint” auction and the CCMA’s art auction.